If you don't see a scrollable PDF here, you can click here and you should be able to see the whole PDF. 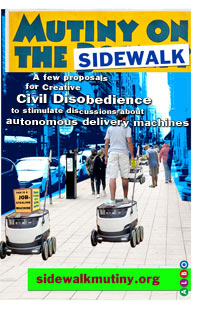 PDFs of the full pamphlet

•  A higher-quality, viewable copy of the full-color PDF - 12 MB

Printable PDFs of the full pamphlet. These can be printed with Adobe Reader using the Booklet setting in the Print dialog, if you have a printer that prints on both sides of the paper automatically (duplex printing).

•  A high-quality, Printable copy of the full-color PDF - 384 MB --- (Because of the large file size, you'll have to click through a "Google Drive couldn't scan this file for viruses" warning to start the download on this one. It doesn't have any viruses or other malware. 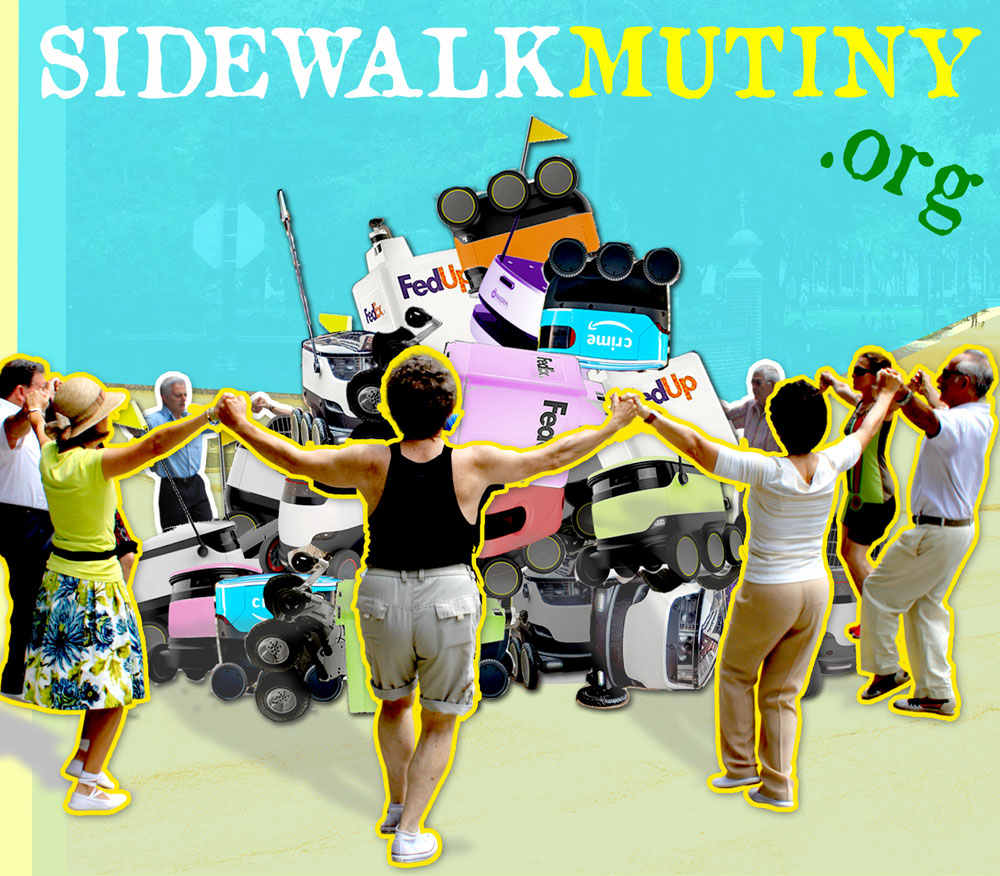 Read about the project

Like most people these days, multi-media artist Albo Jeavons is worried about the future. And also, of course, about the present, and about the little bits of the dystopian future that are being shoved into it by many too-rich, too-powerful, techno-capitalists. With their (pseudo)autonomous, artificially (supposedly)intelligent techno-solutions, they are offering us fixes for terrible social problems like non-rich people having jobs?

Autonomous Delivery Machines are starting to appear; on our sidewalks and our streets and in our bicycle lanes, scurrying around like huge cockroaches with fancy paint-jobs and a LOT of cameras on them. In Pennsylvania, where Jeavons lives, a recently-passed state law allows the machines to weigh up to 550 pounds without cargo; to travel on sidewalks at 12 mph, and in bike lanes at 25 mph, and legally classifies them as pedestrians! These machines will take jobs away from human beings who need them, and make our public walking and bike-riding spaces more dangerous. They will also accelerate the more general problem of the privatization of public spaces. What can ordinary people do to stimulate critical discussions about these techno-solutions to mostly-nonexistent problems? The Mutiny On The Sidewalk project has some ideas!

Until we move our societies into a post-work, post-money model (maybe even some sort of fully-automated luxury communism?) we are stuck with the reality that most people need to have jobs to get money to survive. How do we help people to see that dangerous, surveillance-ready job-stealing machines, no matter how cute they may be made to look, are not a good idea? A free booklet with some creative ideas on strategy and tactics is now available at sidewalkmutiny.org

From unauthorized adaptive reuse idea like Autonomous Rolling Billboards, to community-stimulating practices like Temporary Adversarial Performance Art Situations, and Roving Support Circles For Unemployed People, the Sidewalk Mutiny Project hopes to get people talking - and acting - to intervene in yet another situation where the interests of the wealthy few are rolling roughshod over the needs and safety of the many.

@© anti-copyright 2022, all rites reversed, prosecutors will be violated. Mutiny On The Sidewalk can be copied, duplicated, distributed and disseminated freely for any not-for-profit purpose. More strange and hopefully interesting projects here: http://www.albojeavons.com/

Are you interested in translating these materials into a different language? Send me an email:
And - yeah - this project is sort of vaguely on twitter.

This site, unlike most other sites on the web, does not use code "cookies", so don't worry about that. We do, however, enjoy home-baked cookies to eat. If you'd like to make some for us, send an email: